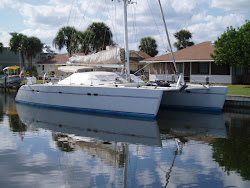 Jeff and I had been on the search for several years for the "boat for us."  Now mind you..we had even gone so far as to contemplate building and had researched that idea until we decided it was just not what we wanted to do.  We had been in the kit airplane manufacturing business so building a boat didn't bother us, it was just the time it would take to complete a boat like we wanted.

Finally after much ado...we came across a Lagoon 55 in Tortola.  The boat was in dire need of a refit. Jeff managed to line up mechanics and riggers, etc. to help get her ready to sail back to Florida. She had been sitting for quite some time. So with a plan and 3 crates of supplies shipped to the boatyard, we had everything set in motion.  Jeff left the first of November, 2009, to get Vitesse ready to come home.  The rest of the crew, me (Cat), my mom (aka..the Narn) and John Knight, a neighbor and captain we know here in Fort Pierce, were all to fly down two weeks later.

Everyday Jeff and I would Skype and talk about how things were going, or should I say not going.  It was as if it could go wrong... it went wrong.  Jeff had planned to get Vitesse in the water a week after he arrived in Tortola and he actually made it. Jeff had really done a great job lining up the guys at the boatyard prior to his arrival and having them get some of the things completed.

Finally the week before Thanksgiving, "the crew" flew from Miami to Tortola to help bring Vitesse home. Hoping to leave next day had been the plan but upon our arrival we were told that there were still some "issues" that needed to be ironed out.  The riggers were not finished and neither were the electricians.  Big Bummer.  That did not bother mom and I as we set out to provision the boat for the trip home.  We made many trips back and forth to the little grocery store.  I think they really liked us. We thought we had done a fine job until the Captain said...more beer.  So...another trip to the store.  And..we still did not get to do a sea trial as planned.

To make this long story shorter, it took two more days before we finally headed out into the deep blue sea.  Things were still not as we had hoped but  were going good enough to get her home.  At least so we thought. Remember, she had been very neglected and had been sitting on the hard for a very long time.  Things were just not the best.  Everyday something broke.  I have to hand it to Jeff, he is a very good MacGyver.  And we had planned for all kinds of things when we shipped the 3 crates of supplies to the boat.  So...we limped for 3 1/2 days to Turks and Caicos and stopped for fuel.

So far so good. Thanksgiving day we had the best day of all.  Things finally seems to go very good that day.  That evening we had a great dinner of steaks and then had a show of dolphins jumping around the bow.  All of a sudden Jeff yells that there is water in the port hull.  As I walked down the stairs, we had water up over the floor boards.  It was quite a sight.  Again, Jeff had planned ahead and we had extra bilge pumps that we hot-wired to a battery. We all worked together to get the water down to a level that we could find the leak.  It was at the stuffing box.  A clamp had broken and it was gushing in.  Now...to fix it.

In this boat the engine sits in the middle of a wall.  Half under a bunk and half in an "engine compartment."  I  had to get in the engine room with a flashlight (it was now about 9:00pm) and Jeff was coming at it from the other side.  It would have been a real mess if it had been just the two of us.  Anyway, we got it fixed and with more bilgeing, got a majority of the water out.  Luckily, it did not get up to the engine.  Whew.

Now we have weather and it is kicking up a big one.  Seas are getting big.  About 15 feet.  It is just generally not much fun.  This goes on for the rest of the night.  The next morning it is still beating us.  We are now off of
Spanish Wells, Eleuthra, Bahamas.  We decide that we have all had all we can take and tuck in to Egg Island.  What a welcome relief.  I can tell you by the time we got there, we were all exhausted.  Between the water and then the storm, we were just wiped out.  The real kicker was that Jeff decided to check the bottom of the boat and when he did he found that we had broken a strut.  So...no more port engine.  We were going to have to single engine the rest of the way.

The next morning was beautiful.  And all I can say is that the rest of our trip home was for the most part uneventful.  Just slow.  We made it in 8 1/2 days.  That is even with all the problems and mishaps.  So...that is how Vitesse made it to Fort Pierce.

Now...for the facelift.
Posted by Jeff and Cat at 6:12 PM No comments: